India, during most of her glorious past, was a faith driven country.And out of the many faith based traditions being passed down for generations, the annual pilgrimage undertaken by the Warkari clan of Maharashtra is one of the most awe-inspiring ones. Watching thousands of devotees from every corner of the state walk together as one towards a focused spiritual destination was a privileged sight.

We, the students of Symbiosis MBA HHM 14-16, had the honour to serve
this community over the weekend. After dividing into 4 teams, each team headed towards their location with minds full of self-doubts for no one had done this kind of work before. Team 1 was allocated the location of Vishrantwadi-RTO for day 1 and Vitthal Mandir, Nana Peth for day 2. Initially no one was quite sure what needs to be done as individual roles were not clear to anyone. All we knew was we need to manage the crowd. Team 1 was the first team  enroute of the warkaris who were heading towards Pandharpur. However the swarming humanity was  overwhelming.!! 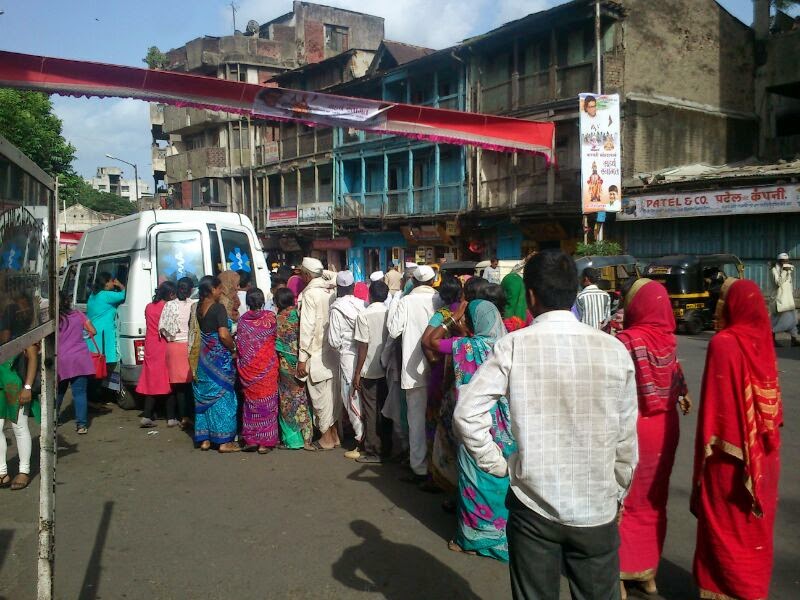 But under the expert guidance of the medical officer in charge of the location, our team leader and with assistance of the already present EMS batch everyone was soon aware of what needs to be done. Quickly team divided into 3. One brought into order the crowd milling around the doctors who were administering topicalpain killers. Second and third team brought into control the crowd which were receiving medication from the doctors. Language barrier was soon overcome by crude but highly effective sign language assisted with few marathi words. Soon it was a question of how long the energy lasts. The food committee made sure we have full stomachs. Surely they knew that their army cant work on empty stomachs.!! By 5pm, everyone was exhausted.

Next day dawned with some sore muscles for company. However the experience of previous day was satisfying and the team was looking
forward to another day of community service. The arrangements at
second location were lot better. While on day 1 the team was standing
for most part of the day, this location had comfortable seating
arrangements. The comfort reflected in the spike in number of patients
that were attended on day 2 as compared to day 1. The service had to
be stopped not because we were tired but because we were exhausted
with medicines for the day. Overall it has been a soul satisfying 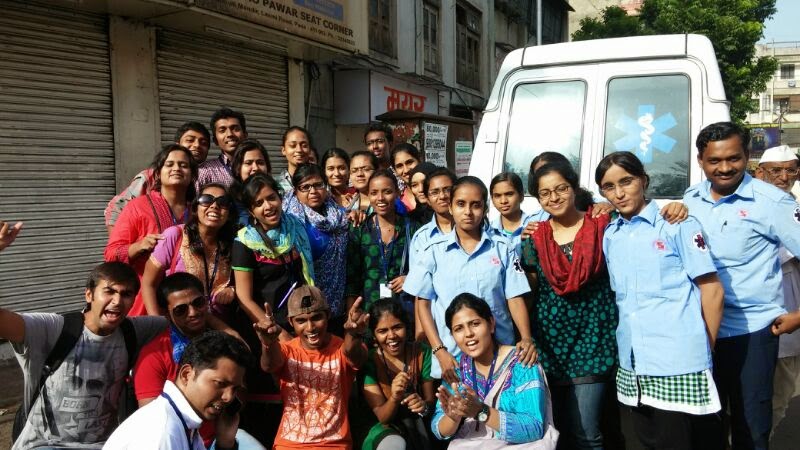 experience and every bit worth the tiredness everyone had to endure,
knowing that we have served around 5000 patients in just two days.

Most of the pilgrims complained about Joint pains, eye infections,
nausea n vomiting, small wounds and general weakness and were provided
with analgesics,anti inflammatory agents,anti emetics,anti allergics and oral rehydration therapy. Drssings were also done for the patients.

Sea of humanity thronging towards Vitthal-Rukamani takes along
with them our collective reverence for the all presiding deity and the
confidence that every time they start walking again, year after year,
they would find Symbians waiting along the way to serve them whole heartedly!! 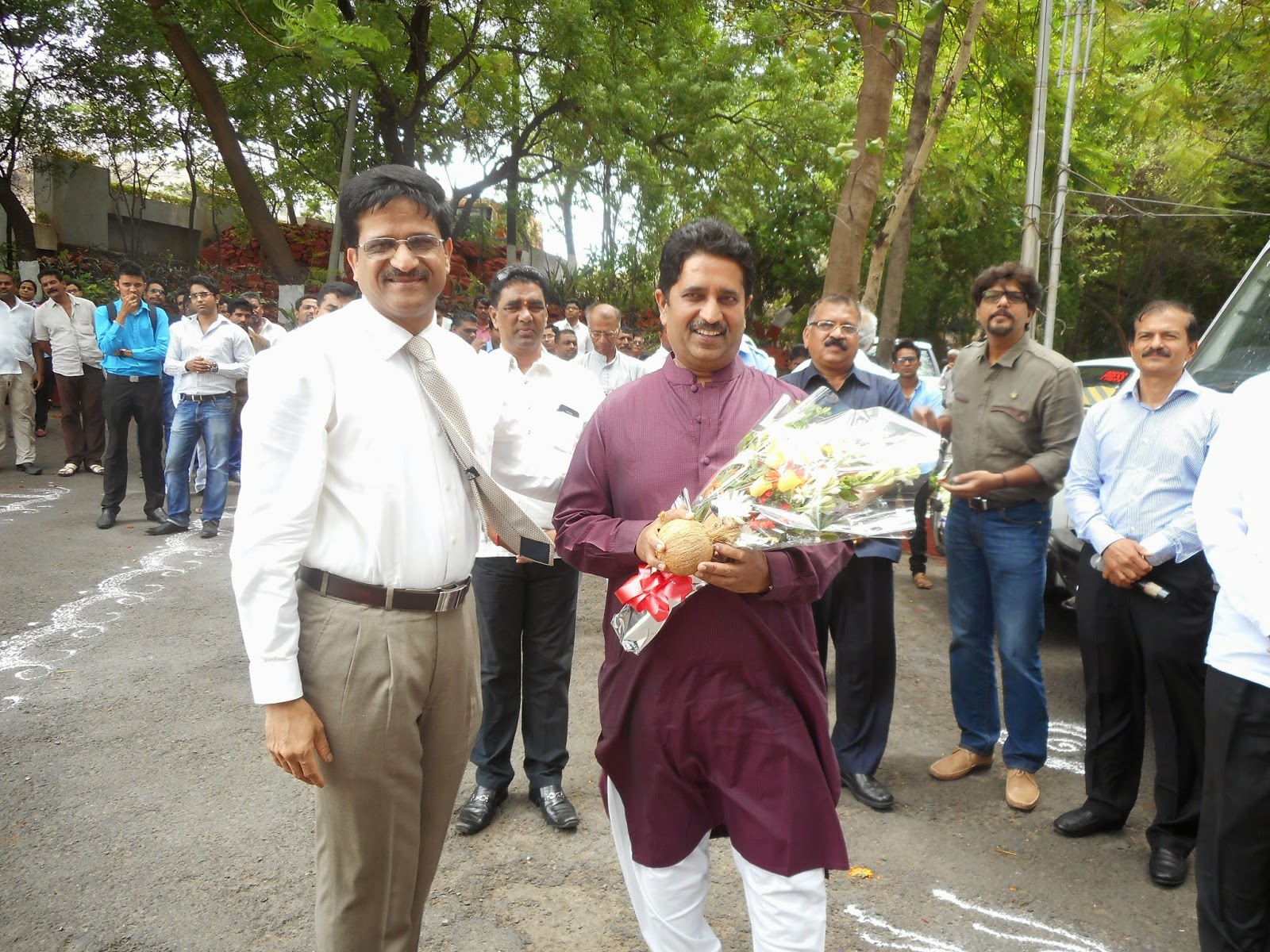 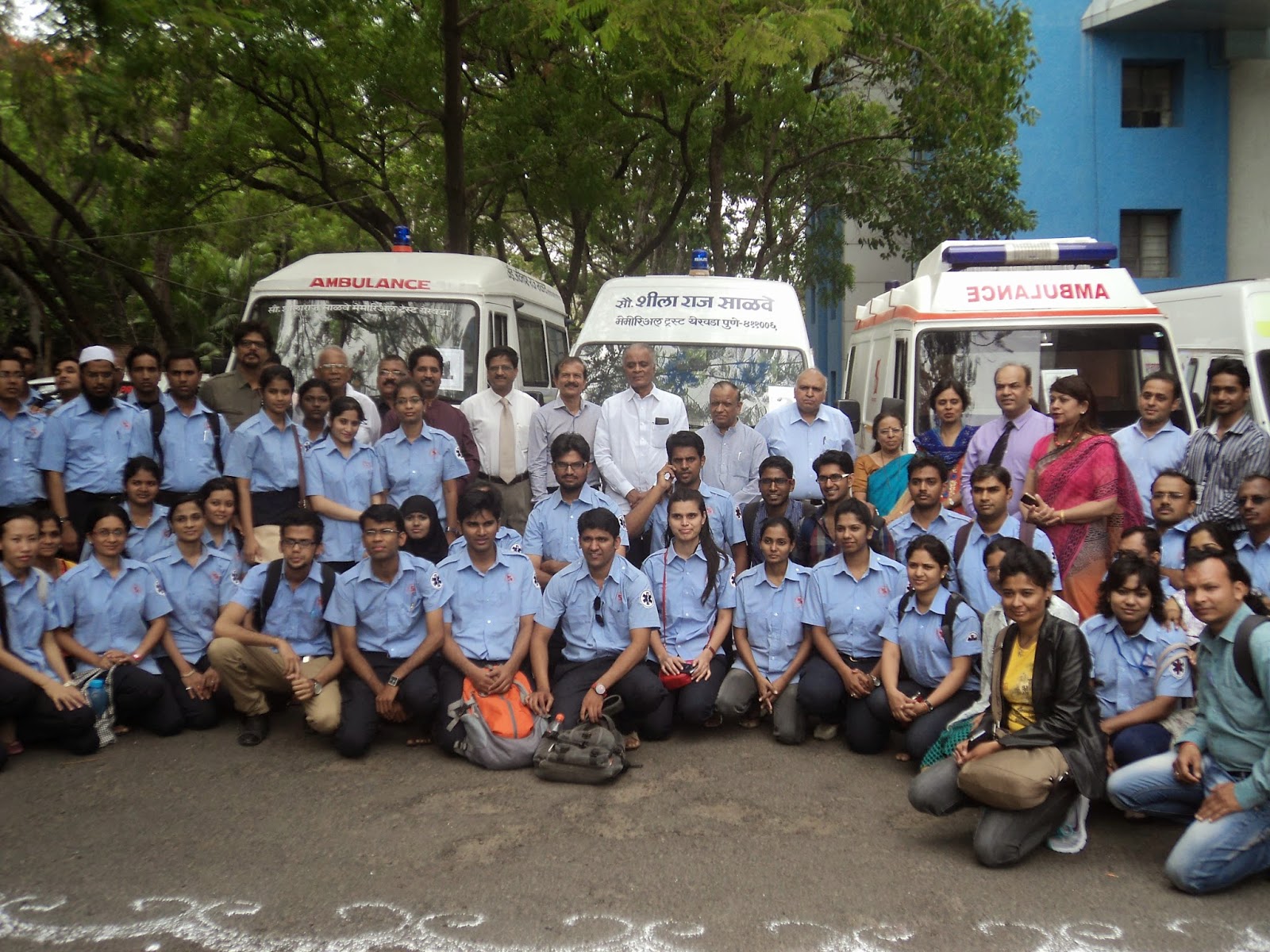 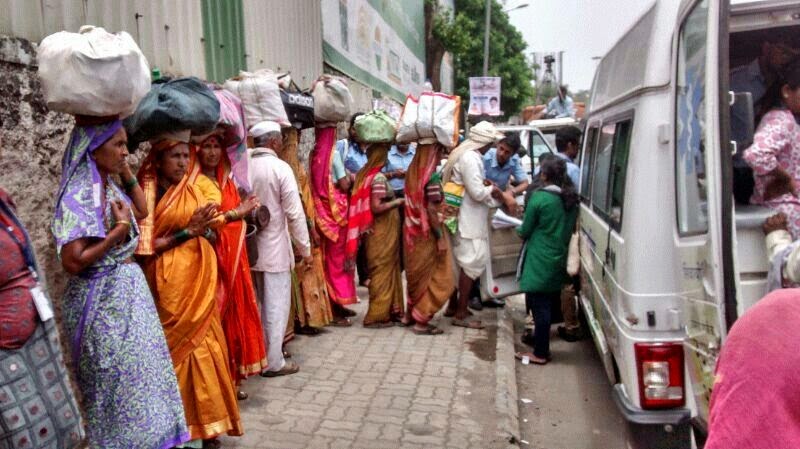 Last year the total number of warkaris served were 12,552. This year the total number of warkaris served has increased to 26,950. Warkaris were treated for various ailments like Acute Gastro Enteritis, Fever, Acute respiratory infection, different kinds of minor injuries, aches / pains etc. The event was successfully managed by SCHC Medical Officers, Emergency medical practitioners’ and the MBA students which was applauded by one and all.
Standing true to the saying, “Leader by example”, on 21st June 2014, Dr. Vidya Yeravdekar, Dr. Rajiv Yeravdekar encouraged the teaching & non-teaching staff members of Faculty of Health & Biomedical Sciences to join & walk with the wari which was nearly 15 K.M. This as cited later by many employees of Symbiosis was an experience of a lifetime.
Posted by SIHS at 01:01 1 comment: 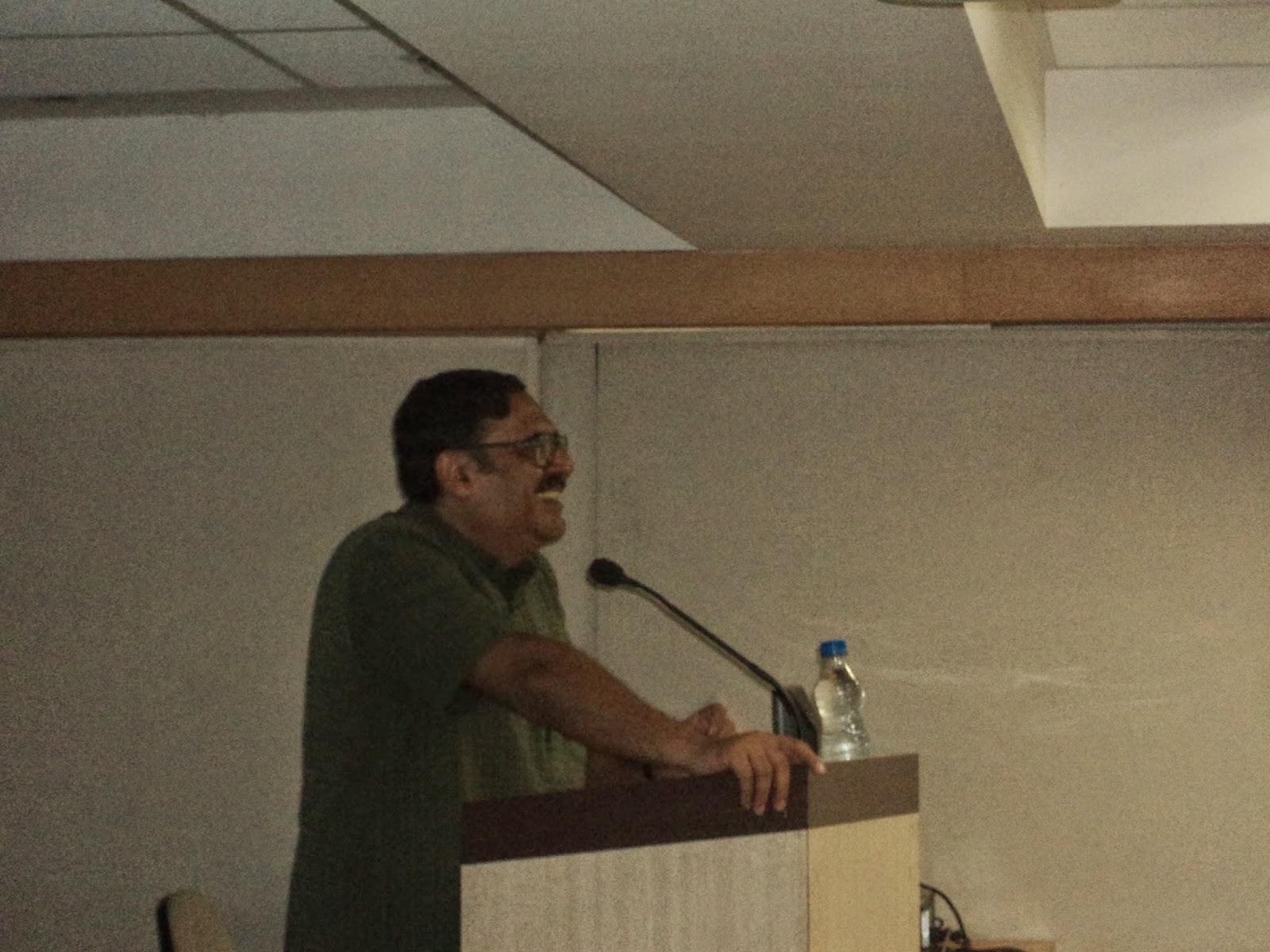 Our respected guest Dr. Abhay Shukla, Senior  Coordinator of SATHI-CEHAT, provided us with a highly interactive and informative session pertaining to community health, the fundamental rights of a patient and how these can be promoted.

Dr. Shukla emphasized on the relationship shared between patients and the healthcare providers. Private sector plays a major role in healthcare delivery in India. However there is no regulatory act governing the standardization of rates in these private  hospitals. For example, a simple Cesarean  section may cost anything between 15000 rupees to 1 lakh rupees. This may lead to  an explosion on healthcare costs in highly commercialized private corporate hospitals. We must have a comprehensive regulatory body. 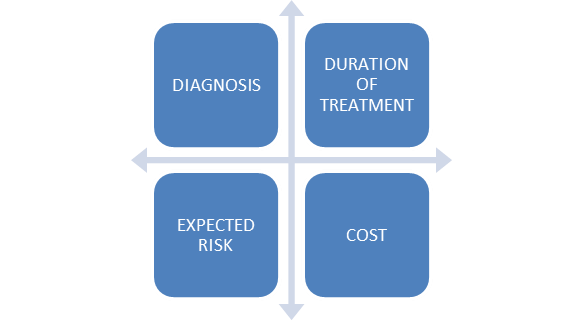 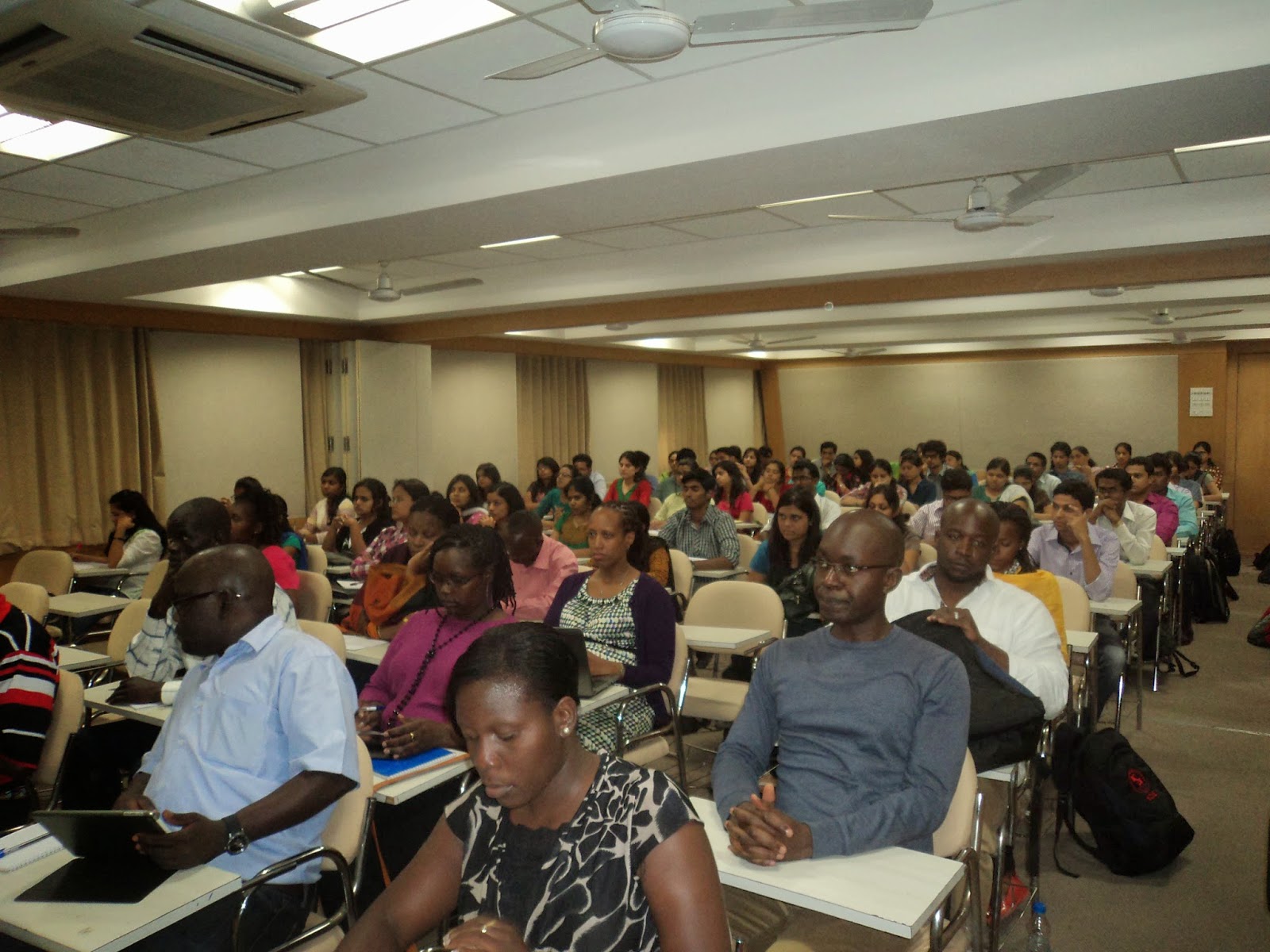 The following issues related to RTI were  addressed  during the lecture -


He Also mentioned, according to the PROFIT LOGIC only the one’s with money get healthcare. According to SOCIAL LOGIC healthcare is a human right. Dr Shukla highlighted the ventures  of SATHI teaming  up with JADS in Barwani in MP since 2000.In the Community health centre in Pati, the people were unsure about the workings of the hospital. There were no proper doctors and no rules and schedules were followed. The needles were reused. No proper hygiene was maintained. Due to the help rendered by SATHI and the villagers the following changes could be achieved-


LEVELS OF PLANNING – STATE PLANNING AND MONITORING BY SATHI-
The levels of monitoring begin from the District level where a body of people especially doctors monitor a particular district. All affairs under the district are planned by this body. These people assign delegates to a smaller area or the Block inside the district. Inside each block there are the smaller and more compact  People’s health care units that cater to the healthcare needs of various small villages. This is a chain of events that is closely monitored and followed.

Overall the session gave us a comprehensive idea about how collaboration can help our community in terms of health, especially in rural areas. It was highly enjoyable and had a very practical approach to spreading awareness and other health issues. 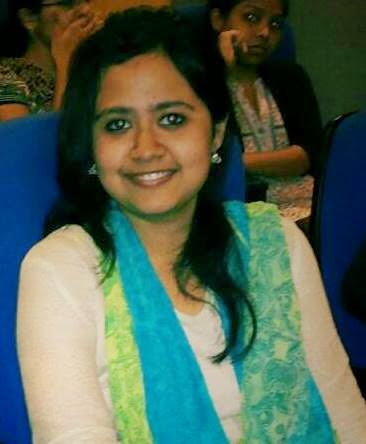 The day was 3rd June, it was early morning and I, adorned in saree entered the Symbiosis Premises. At first glance, there was much about the surroundings that would attract my attention. New Friends, new environs filled me with elation and ecstasy.

Director, Dr.Rajiv Yeravdekar addressed all students with an inspiring speech. I felt proud to be part of this University.
The process of Induction to welcome new students to the institute and preparing them for their new role excited me.
The next day, our tour to main campus at Lavale was thrilling and fun-filled. The concept of making us acquaint of Symbiosis as a family was awesome. This was the first occasion when we all friends interacted and got to know each other. It was more like a trip rather than a formal tour. Thanks to all faculty members to organize and methodize the tour. I must say, to be part of Symbiosis is a great feeling.

The guest lectures by Dignitaries was knowledgeable and thought provoking.
Director-  HR, Glaxosmith Mr.Ronald Sequira  ’s lecture on overview of pharma sector was captivating. The formula for success given by him-Attitude, Change Orientation And Ethical Standards motivated me.

The interactive round of  Colonel SKM Rao’s Session, GM Columbia Asia Hospital  about hospital management was equally inspirational. I am totally convinced with the fact that the future of Hospital Industry is magnificent with a clear vision to provide excellence centered on patients’ needs.

Mr.Murali Reddy , Senior VP & Global Head , Syntel  session on IT in Healthcare brought all together a new dimension to our exploration in healthcare industry .He explained how over the past few decades, technology has had a revolutionary impact on all the aspects of our lives and world of healthcare is no exception where IT is helping to shape the way in which diseases are diagnosed, treated and patient care is delivered. He actually gave credence to how healthcare IT is a dynamic space and is going to be the single most important discipline capable of creating a step change in healthcare over the next decade. Sir’s Strategy for  success-Learn, Think Differently, Entrepreneurship skills with impossible dreams exhilarated me. 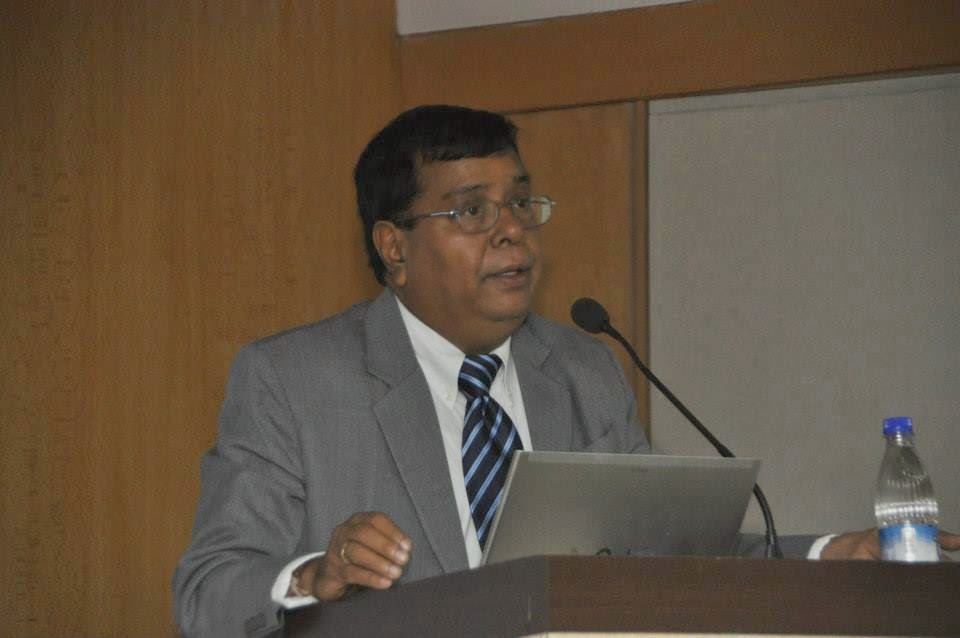 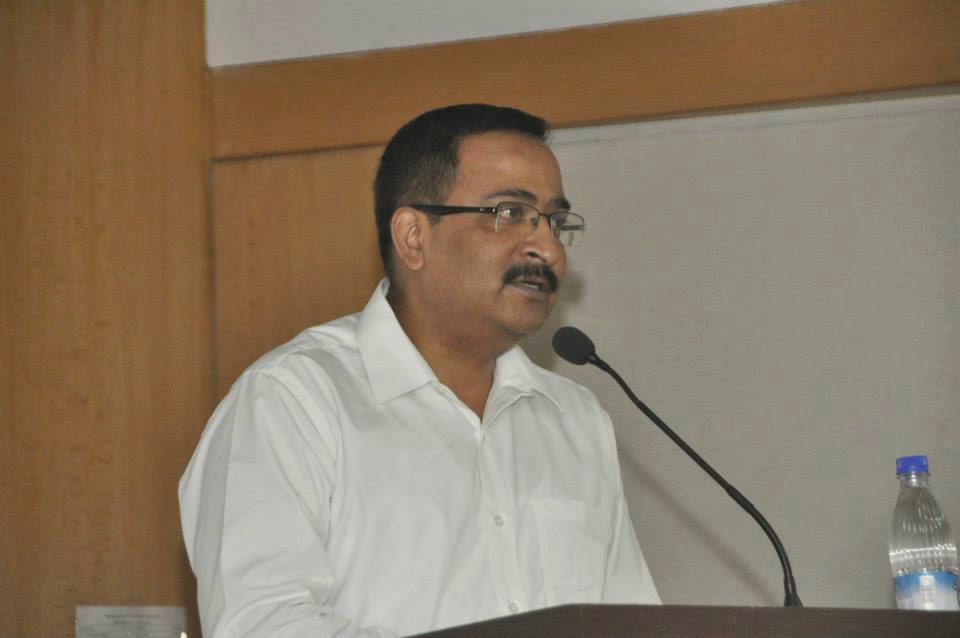 Mr Himanshu Head, Strategy Business Development and strategic Accounts, South Asia at Medtronic India mesmerized us too. The talk on Medtronics-The global leader in medical technology was exceptional and commendable.

The Oration of TPA by Mr. Praveen Yadav, CAO of MD India was a helpful exposure in giving us insight into TPA Landscape-current and future ,Job Opportuinities and most importantly the mantra to reach glory i.e The knowledge, Skill sets(Developed over the period of time) and the Aptitude.

Research in healthcare, another emerging field added an innovative aspect to a healthcare industry at large. Dr.Sandeep Salvi  gave us awareness how medical research studies are done to learn about and to improve current treatments. The enlightenment was appealing and inspired us in the field of research.

The Alumni interaction was the best part wherein we students , frankly reach out the Alumni in clearing our doubts about various eventual trends in healthcare Sector.Thanks to Dr.Sonal Dixit, Dr.Siddharth Mathur, Mr.Tanmay Kale, Miss Vasuvie Gupta in making us understand the substantive scenario in healthcare structure.

Last but not the least, The lecture on Ethics and motivation by Mr.Ramesh Sharma Ex DGP, was outstandingly impressive and profound. 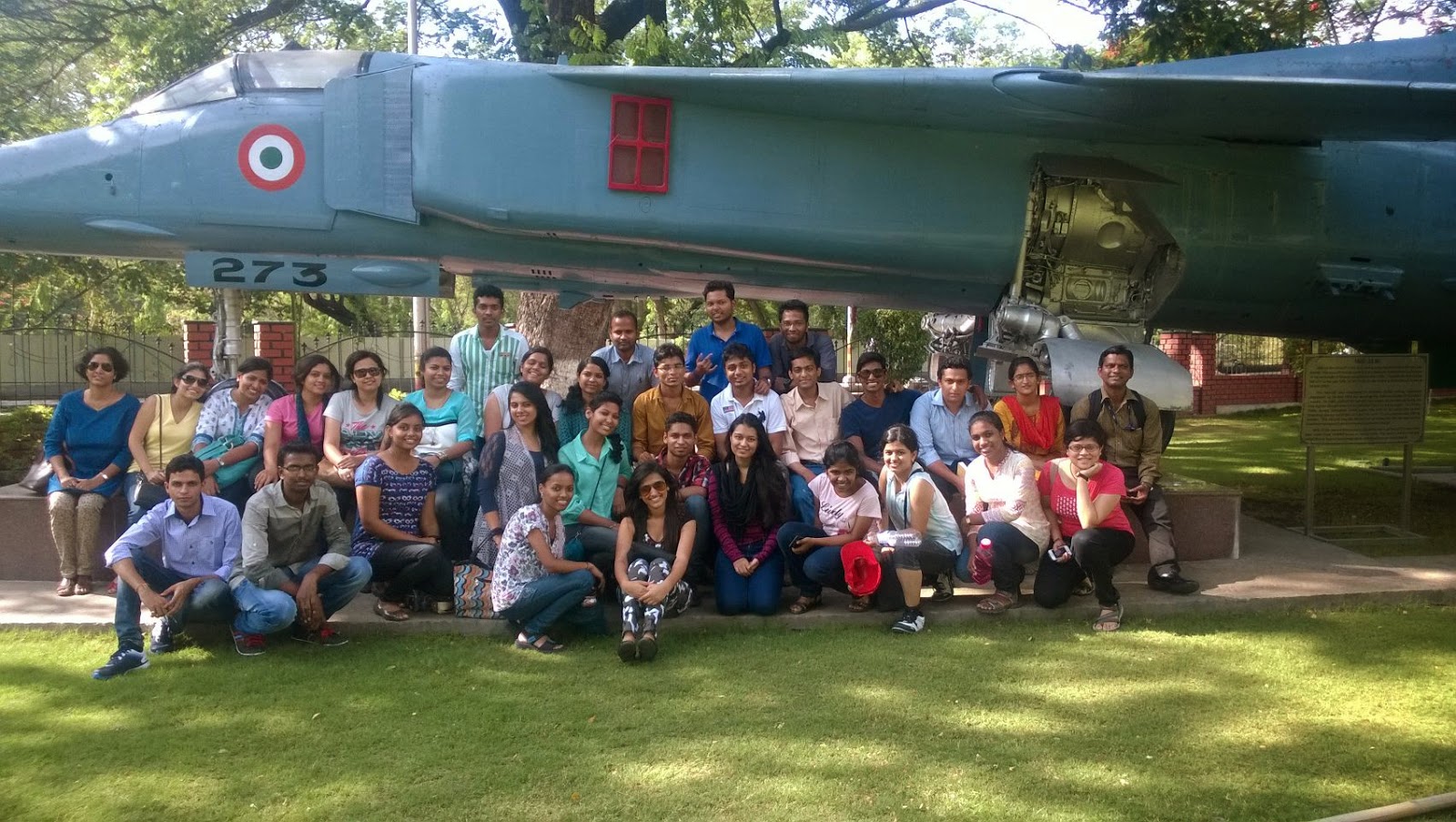 At the last day of the induction program,
Leisure in the form of Pune Darshan
cannot be ignored. It was reasonable &
refreshing with the idea of exploring Pune. 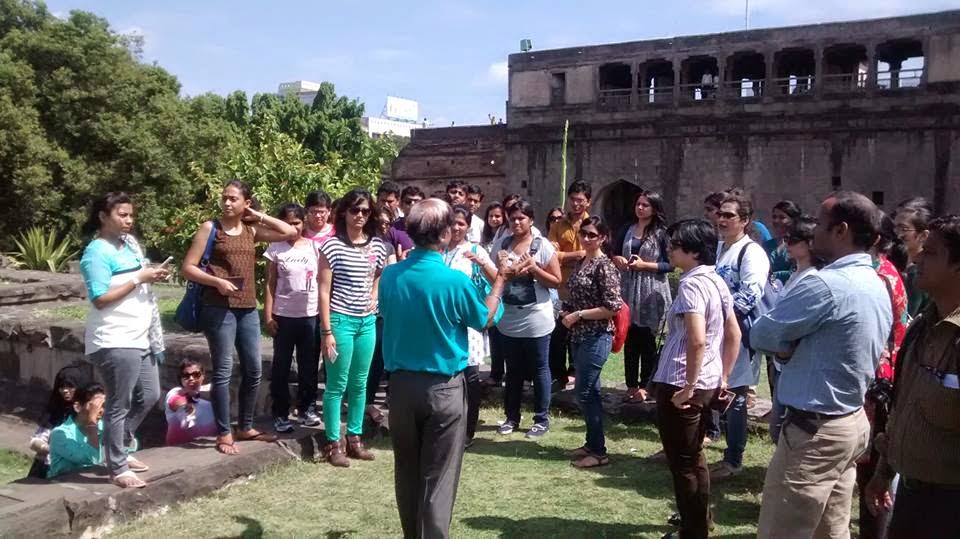 Finally I am thankful to all faculty members of SIHS for putting efforts in arranging such a remarkable Induction Program. I must add, the Overall Program helped us in development of Theortical skills, to establish a good communication and in understanding the different career prospectives in healthcare industry.

August gathering of Students  and Parents 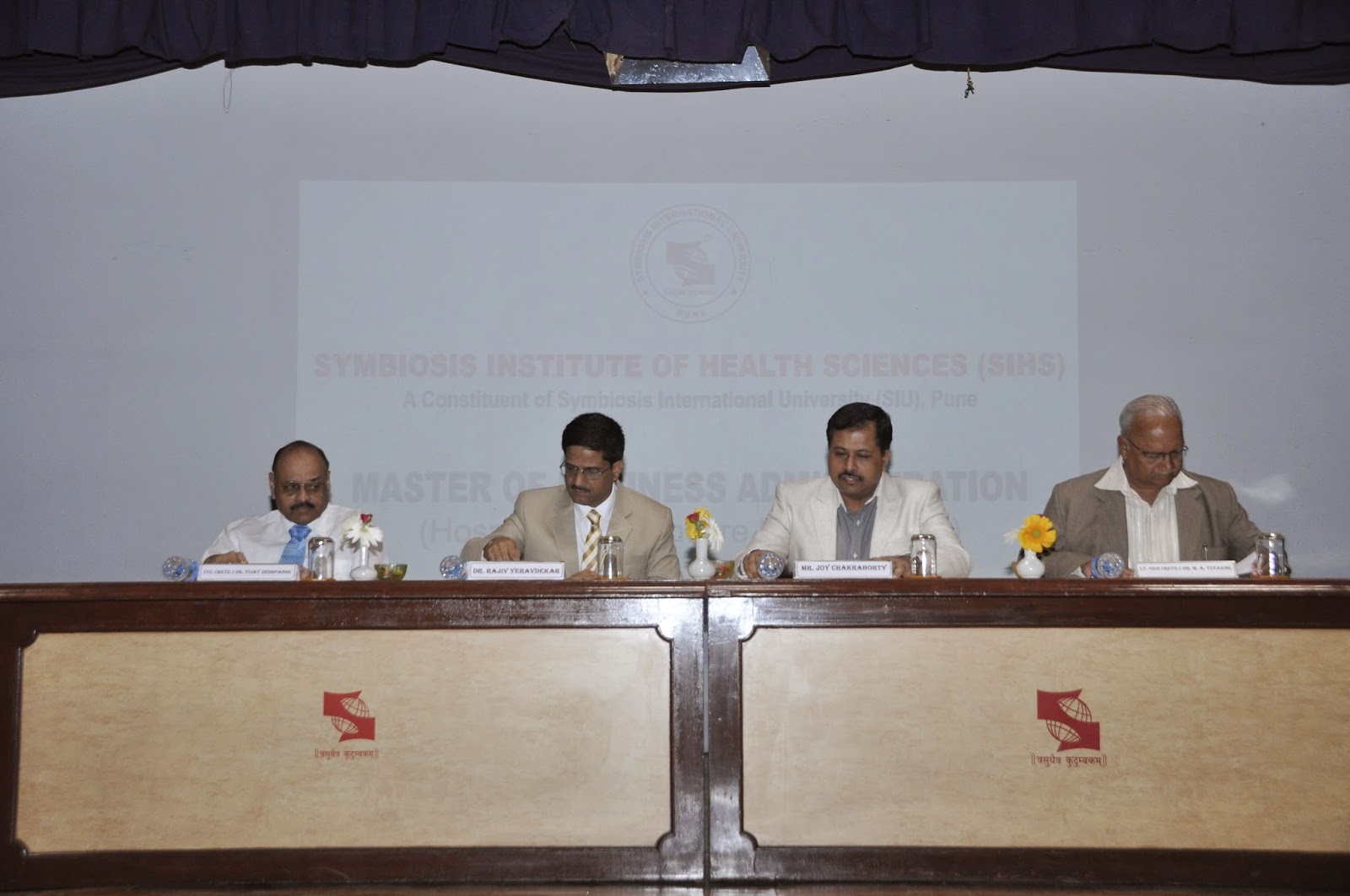 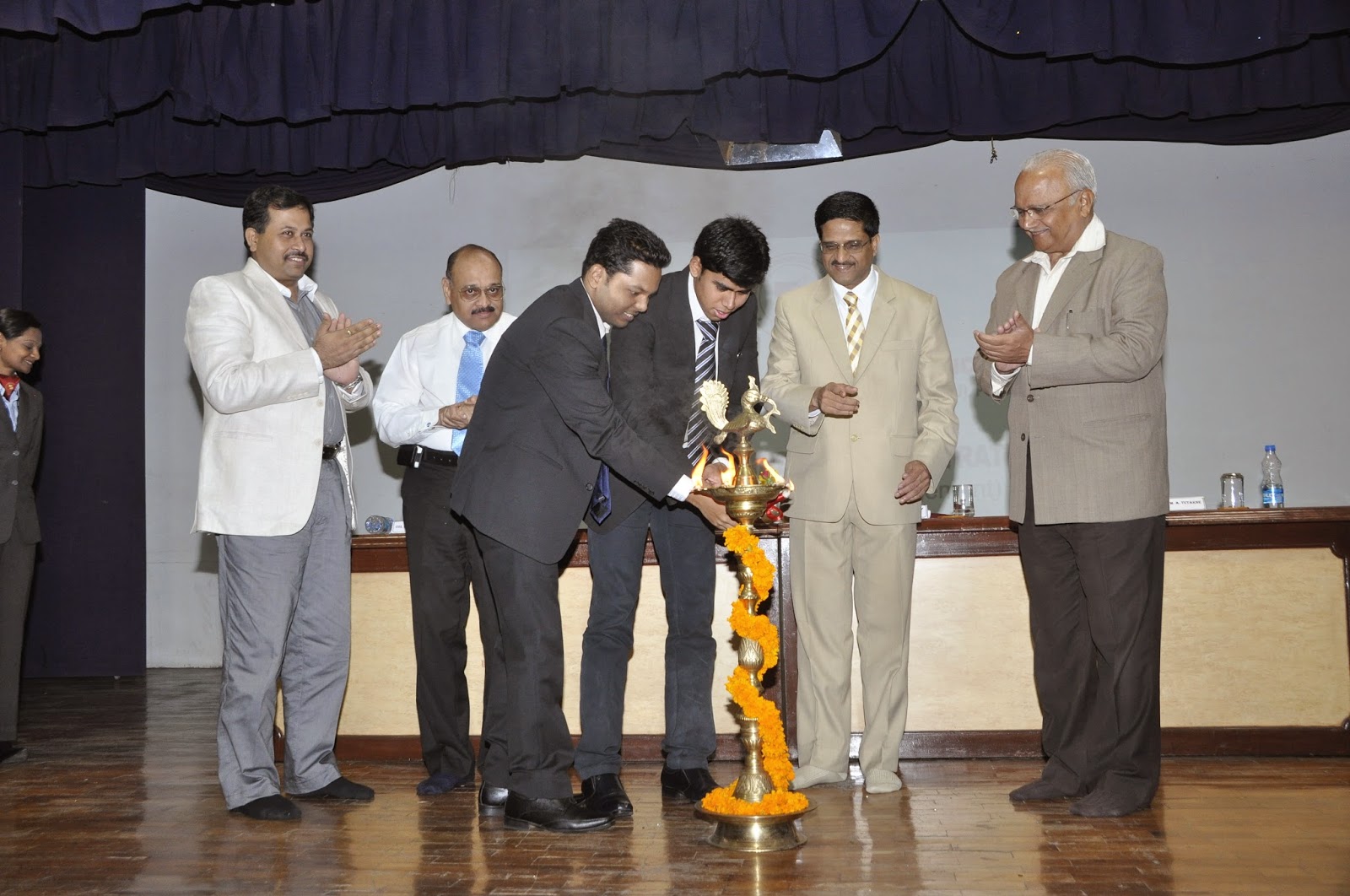 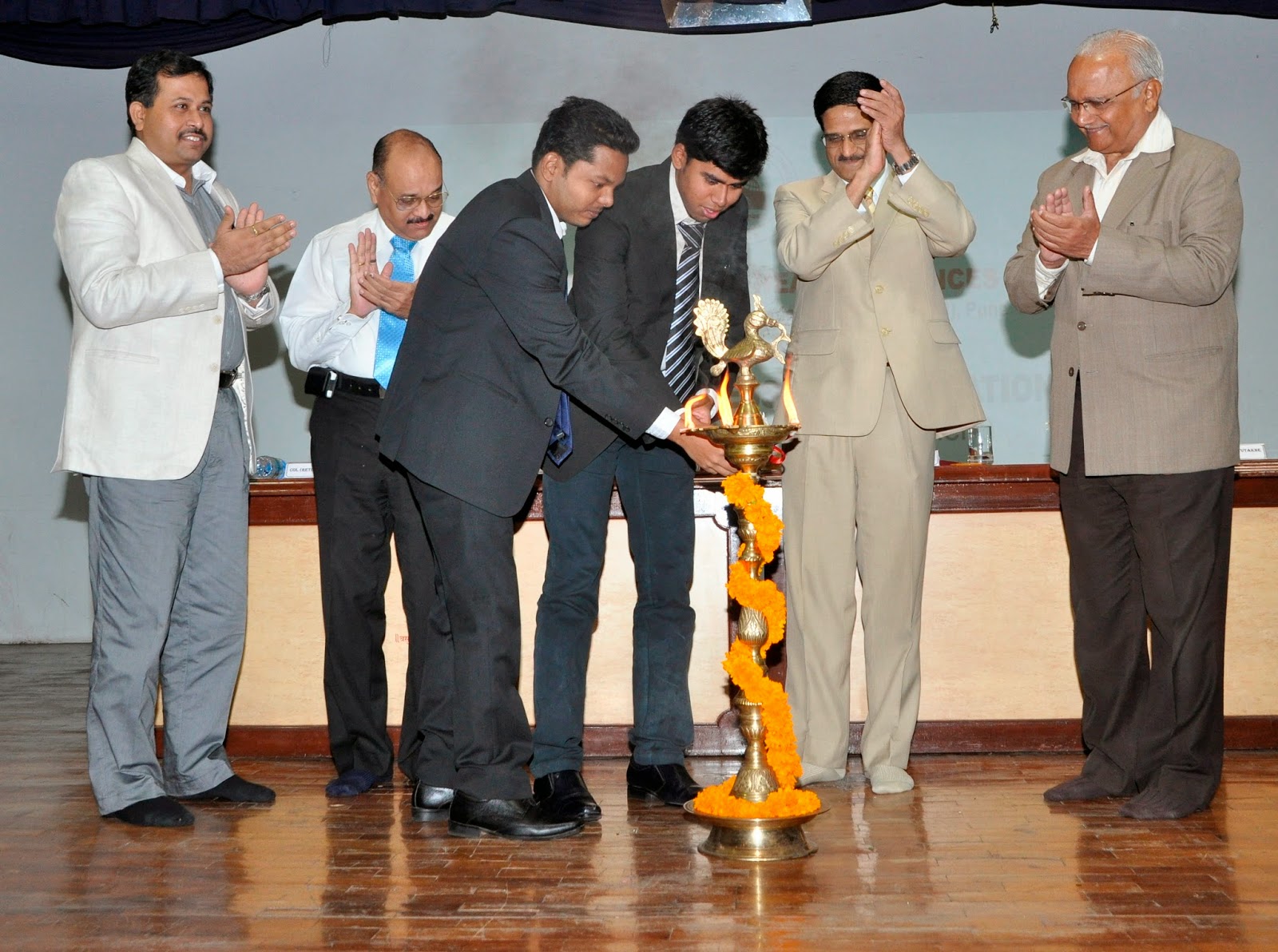 Lighting of The lamp 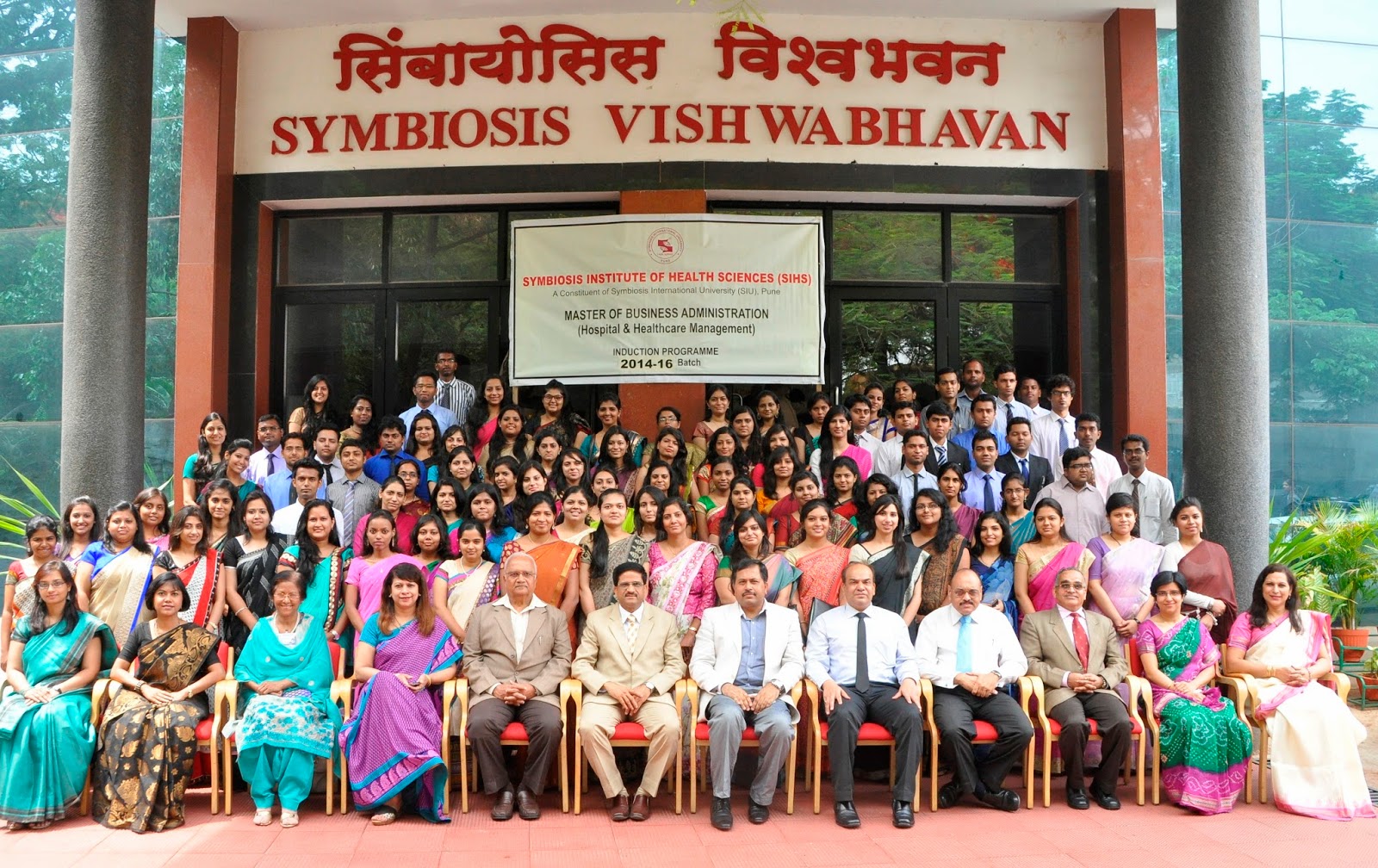