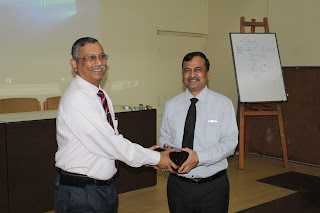 As students we are always taught that “sky is the limit”. Symbiosis provides us with a platform to reach new heights. Keeping into mind the growth and development of an individual as a whole, SIHS conducted a workshop on 19th January 2018 on hospital financial planning. There was an array of speakers from renowned hospitals who enlightened us with various aspects of the finance in a hospital. 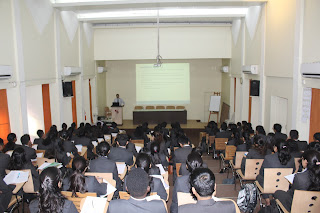 The first speaker was Col. SKM Rao, CEO, Jupiter Hospital, Baner. He spoke about the basic concepts of finance like profit and loss accounts, break even sales, break-even point etc. it provided us with an insight into the world of finance. Next we had Abhijit Dhumal and Mr.Avinash, customer care manager, Colombia Asia hospital, Pune. The session with them was exhilarating as they told us about the various procedures in billing and accounting of a patient when admitted in the hospital. They also spoke about the different packages that are designed for individual patients and executive packages. They shared some real- life situations where several issues regarding payment were of grave concern to the patient. The final speaker was Mr. Sunil Verma, Assistant Professor, AFMC, Pune. He spoke about the entire budget planning and how funds are raised in the public sector. His lecture changed our perception about the entire public sector. 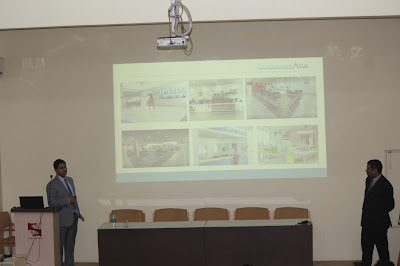 All in all, the entire workshop was extremely educative and helped us to gain more information about the various aspects of finance and how is it dealt in the hospital. Such workshops always give us an opportunity to learn more about the industry and promote newer skills within us.

On 15 th January 2017, Symbiosis Centre of Management Studies conducted a panel discussion on"Cinema as a medium of social consciousness and cultural transformation"    by the one and only Khiladi of the Bollywood –Mr. Akshay Kumar. 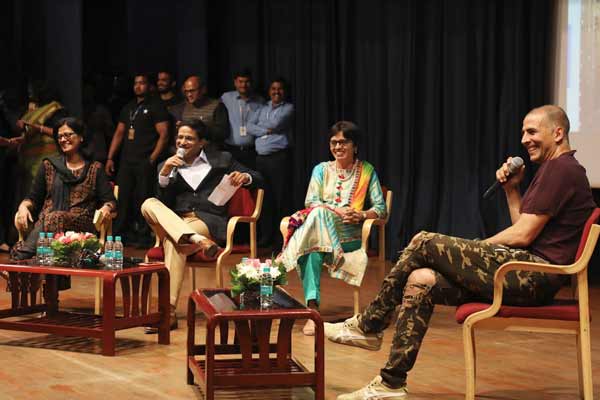 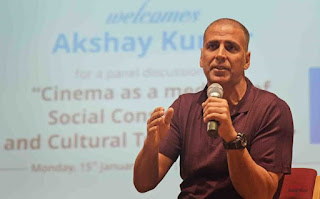 Here, Mr. Kumar started the session by talking about the aims to remove the stigma around periods. He believes that entertainment can normalize taboos in a way, other mediums cannot. He discussed that how women should not shy away from talking about the menstruation issue and certainly should not whisper about it, as it is as natural as having food and drinking water. Mr. Kumar also shared his experiences with the women while shooting for the movie, like various methods these women are using to manage their menstrual bleeding like ashes, mud, dirty clothes etc. and he also told us that 30% of rural women do not even know about the sanitary napkins.

He also slammed the Central government for levying 12% GST on sanitary napkins and said that instead women should get it for free as it is a basic necessity. He also made the session interactive by answering several questions from students regarding the movie.In the hour-long discussion session; Akshay was witty, funny, and honest. He spoke of his stand on being a part of socially-relevant films,
his interesting line-up of films in the last few years, and his fitness. 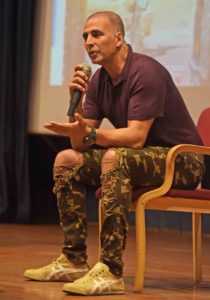 He also explained that how government cannot be blamed for everything, Akshay expressed, “We always blame the government. But what do we do? I stay on the beachside in Mumbai. So I make sure at least the 100-meter area in front of my house is clean. That’s what every citizen of India needs to do. It is about time we did things ourselves and only then we will see a change.”

In between the session, the Ambassador of Gambia, Jainaba Jagne walked up and Mr.Akshay invited her to join him on the dais. Impressed by his work, she remarked, “The message that he is trying to send out is a problem for every lady across the world. It’s a natural phenomenon, which should actually be a part of everyday conversation.” And also she was generous enough to promise Akshay that she would love to screen Padman across theatres in Gambia.

At last he also shared the mantra behind his great physique- he sleeps at 9.30 p.m. and wakes up by 4a.m. In short, he has never missed a sunrise. And without fail he chants the Gayatri Mantra in the morning. Akshay is a family man. His parting words to us were: “Before stepping out of the house, I always touch my parents’ feet. Just do that because there’s some positive aura about it.” Through his speech he busted many myths regarding periods and emphasized on youth being country future and its role in spreading awareness among the country.